Do you support abortion on demand during all nine months of pregnancy, or even after birth if a baby is so fortunate as to survive an abortion procedure? Congratulations! Today’s Democrat Party wants you!

Do you love the river of human misery that flows across our southern border? The sex trafficking, drugs, and potential terrorists? Congratulations! Today’s Democrat Party wants you!

You believe it’s no big thing, and nothing bad could possibly happen (it’s transphobic to even suggest otherwise!), for men to share locker rooms and restrooms with women and girls. Congratulations! Today’s Democrat Party wants you!

Are you a closet Anti-Semite, yearning to be free? Do you support the BDS Movement? Is “Cherchez la Juive” your guiding principle? Are the terrorists lobbing bombs from Gaza into Israel the real victims? Congratulations! Today’s Democrat Party wants you!

Do you prefer to pay more, rather than less, for fuel for your car? How about to heat your home? Higher energy costs are going to save the planet, right? Congratulations! Today’s Democrat Party wants you!

Are you going to forego having children because their lives will suck anyway because of global warming? Assuming the world hasn’t ended in 2031? Congratulations! Today’s Democrat Party wants you!

Do you feel the Bern? Socialism is, like, awesome, right? They just did it wrong in Venezuela! Congratulations! Today’s Democrat Party wants you!

Congratulations! You support the most extreme positions in U.S. politics today and the Democrat Party already owns you! 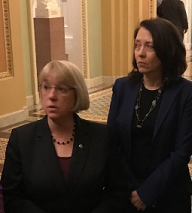 Me: Maria, why so sad? Maria: The GOP just killed millions of women.

If Patty Murray and Maria Cantwell actually believe the things they tweet, they may be the stupidest people around, lacking sufficient intellectual depth to understand any topic at more than a surface level.

And that’s if I’m being nice.

The other possibility is that they’re shameless partisan hacks*, mindlessly spouting off leftist talking points regardless of the truth. In other words, they’re liars.

For example, last Thursday, the Senate voted on whether or not to allow states, at the discretion of their own legislatures, to withhold Title X funds from family planning clinics that provide abortions. Basically, the vote allows states to choose not to use that federal money to fund Planned Parenthood. That’s it. That’s all the vote authorized. Not a single thing else.

Not according to Murray and Cantwell, who apparently don’t trust states to make the “right” decision. You know, the decision that agrees with them. So they were going on about the Title X vote as though every woman in America has suddenly been cut off from access to any health care whatsoever. Or as Patty Murray says…ZOMG, Women will die and Mike Pence is the devil! 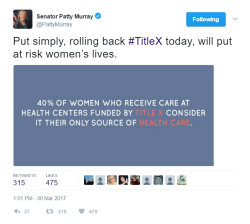 If last week’s vote accomplishes nothing other than to allow the states to disburse Title X funds, why, then, are Democrats so determined to mislead the public about it?

I recently wrote, “Democrats…repeat lies until they’re ground into the public consciousness and internalized as truth.” Democrats know that defunding Planned Parenthood is a winning issue for the GOP; therefore they must lie to try to steal the win. That they lie in ways specifically calculated to instill fear in women is particularly contemptible, because it illustrates their misogynistic belief that women are politically naive and easily manipulated. This is the basis for the entire “Republican war on women” story line.

Fear is a powerful motivator. Powerful enough to cause otherwise rational and intelligent women to march for rights they already have. Fearmongering. It’s the Democrats’ #1 strategy and it’s disgusting.

What is wrong with Californians?

In California, a 12-year-old girl can’t take an aspirin from a school nurse, participate in a school  field trip or utilize a tanning bed without the consent of her parents, but that same girl can consent to a vaccination (HPV) or abortion with her parents none the wiser.

That is seriously twisted.

Who Speaks For The Unborn?

Who speaks for me?

Not Bart Stupak and his disgraceful band of faux-life Democrats.

Here’s the thing: either you believe that a pregnant woman carries within her an actual human life that is to be cherished and protected or…you don’t. There’s very little room for compromise and back room deals.

See what redhk has to say over at RedState.

Scroll to the bottom to view the ad.

If you’re planning on watching the Super Bowl with your family, take care to guard your children’s hearts and minds, as CBS is inviting a dangerous intruder into your living room.

Subject: Focus on the Family in your living room

CBS has cleared the way to subject nearly 100 million people to Focus on the Family’s extreme agenda by agreeing to air its new pro-life ad during the Super Bowl.

Focus on the Family has an unmistakable anti-choice, anti-birth-control, anti-sex-education, anti-gay agenda. If that isn’t bad enough, its views on women are just plain insulting and dangerous. For example, its web site urges women facing an unintended pregnancy to seek “wise advice” because “the hormones and extreme emotions of pregnancy make reasonable decisions more difficult.”

We can’t just sit by while CBS lets Focus on the Family place a political ad during the Super Bowl, when millions of people are watching ads.

It’s unprecedented for CBS to approve an ad of this nature during the Super Bowl.

All major networks hosting the Super Bowl have denied ad space to political candidates2 and organizations including PETA*, MoveOn.org, and the United Church of Christ. Now CBS is trying to justify its decision by changing the rules in the middle of the game.

It’s absurd that CBS would give Focus on the Family a platform to spread its message to tens of millions of people – especially when it has blocked other advocacy groups from having the same opportunity.

Thanks for holding CBS accountable and not letting the network make exceptions for Focus on the Family.

What is it that has them so worked up?

The 30-second ad’s theme is “Celebrate Family, Celebrate Life” and a Focus on the Family press release said the Tebows agreed to the ad because “the issue of life is one they feel strongly about.” As a result, the ad is widely expected to focus on Mrs. Tebow’s pregnancy with Tim, when she was encouraged by doctors to abort him.

Still, Focus on the Family is keeping the specific content of the ad under wraps until its Feb. 7 debut, in an effort to build anticipation.

“The Tebows, they have a lot of really inspiring stories. And [Mrs. Tebow] and Tim are going to share one of those stories on February the 7th,” said Gary Schneeberger, Focus on the Family spokesman.

Jim Daly, president and CEO of Focus on the Family, said in a statement, “Tim and Pam share our respect for life and our passion for helping families thrive.”

The Tebows are evangelical Christians who have served as missionaries in the Philippines on numerous occasions and founded the Bob Tebow Evangelistic Association, which continues to evangelize in the Philippines, where Tim was born.

During one of the mission trips, Mrs. Tebow came down with amoebic dysentery and slipped into a coma, requiring a treatment regimen that included strong antibiotics that can damage or kill an unborn child. When Mrs. Tebow learned she was pregnant, doctors advised her to abort the baby, whom she and her husband had prayed for and already named Timothy, she told the Gainesville, Fla., Sun in 2007.

“Celebrate Family, Celebrate Life.” Hot damn! That is extreme!  I’m so glad that NARAL is watching out for me and millions of other people like me who might be irreversibly scarred by this extreme horror story of a mother’s love.

It’s hard to know where to begin.

NARAL is making these over-dramatic, disingenuous assertions about a commercial they haven’t even seen. Not to get bogged down in details, Keenan proceeds directly to the fear-mongering. Focus on the Family is going to be “in your living room,” where you’ll be “subjected” to their “extreme agenda.” She carries on as though homophobia is something you can catch just by hearing Tim and Pam Tebow celebrating life.

Although the e-mail claimed to have gleaned the information on the “extreme agenda” from the Focus on the Family website on January 25th, it didn’t include links. Searching their site for “birth control” or “sex education” returns no results. I’m not saying there’s nothing there, just that I couldn’t find anything to ascertain what, exactly the extreme views are. I find it highly unlikely that Focus on the Family opposes the concept of birth control and surmise that NARAL classifies Focus on the Family’s opposition to abortion and the morning after pill as “being against” birth control. As I said, disingenuous.

Keenan takes exception to it when Focus on the Family advises a woman facing an unexpected pregnancy to seek “wise advice” because making a rational decision might be hard during such a difficult time. Yes. Clearly it’s better to seek bad advice. Or possibly make one of the most important decisions of your life alone and scared.

One needn’t really wonder why NARAL is in such an uproar. They claim to be pro-choice, but their tolerance for choice only reaches as far as the choices they would make. They’re offended by women who make the choice for life under difficult circumstances. Remember, this is the organization that found it repugnant that people in the State of Virginia might be able to choose to purchase license plates that supported pro-life causes. It’s not hard to see why they’re offended by Sarah and Bristol Palin and Pam Tebow.

Update 1: “In terms of Super Bowl ads, “sexist” is code for “anti-abortion.” But “sexist” does not apply to parading women around in their underpants to sell beer.”

Update 2: The Other McCain has some thoughts on this issue

I’ll likely need counseling to recover from the trauma I suffered viewing this terror-inducing ad. Heh.