Shouldn’t The White House Be A Gun-Free Zone? 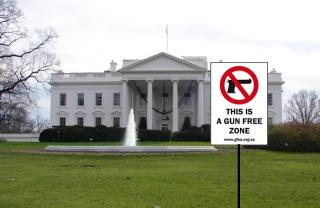 The First Family deserves our best efforts to keep them safe.

Update:  Oh, look here; it appears someone took this thought straight to the White House.

I mean, really. If the best way to keep vulnerable children safe at school is to designate schools as gun-free zones, shouldn’t the First Family live in a gun-free bubble?

Oh, I know that John Doe can’t carry a firearm into the White House, but what about all those Secret Service agents milling about the place? They have guns! And what about those Marines? Do you suppose they’ve checked their weapons at the door? I think not! It’s a scandal, really, how cavalier we are with the First Family’s safety!

Does that sound silly to you? I certainly hope so, yet that is the favored strategy of the American Liberal for protecting the nation’s school children…unless they are lucky enough to attend school with Sasha and Malia Obama.

Before [Sasha and Malia] go to their first day in their new school, the Secret Service will run background checks on the school’s staff and maybe some of the students and their families. Agents will accompany the girls to and from school every day. They may, depending on space, set up a small command center inside the building. If not, they’ll set one up outside. They may tap into the school’s closed-circuit camera system if there is one.

How many agents will be assigned to the girls? “The appropriate number to get the job done,” according to my still secretive friend, Agent Alswang.

If gun-free zones are so safe, why all the fuss?

What about the President himself? Yes, he’s the most powerful man in the world and surely, very, very important, but is he more precious to us as a people than our children? (Note: If your answer is yes, please reassess your priorities.) I can say without hesitation, I would rather see a President dead – no matter who is sitting in the White House – than 20 six and seven-year-olds. At least those who choose to run for President know what they’re getting into.

My point here isn’t to say that the First Family needs less security; I’m saying that our nation’s schools need more. People who object to well-screened, well-trained, armed school personnel because they don’t want their children exposed to guns are living in a fantasy world where guns are malevolent beings in their own right and a gun-free zone sign extends magical protection to all who enter those hallowed halls.

If the events that unfolded in Newtown, Connecticut, last Friday haven’t disabused those magical thinkers of the idea that gun-free zones are anything other than killing zones, then nothing will; they should be ignored as unserious on this issue.

Doesn’t our nation’s most precious resource, our children, deserve the best protection we can provide? If so, arming school personnel should be considered as one part of the answer.

Filed under Barack Obama, In The News, Politics

2 responses to “Shouldn’t The White House Be A Gun-Free Zone?”